The Society shall be called the Tenney Family Association Inc.

The purpose of this Association shall be to educate the public regarding the legacy of Thomas Tenney (1614-1700) of Rowley, Massachusetts and his descendants.

The TFA is a premier national family association dedicated to the preservation of our proud Tenney heritage. Our progenitor, Thomas Tenney, arrived in the Massachusetts Colony in 1638. Membership is open not only to the descendants of Thomas Tenney, but also to anyone who has an interest in the Tenney surname or any of its variations. (Tinney, Tenney, etc.) The Tenney Family organization has been in existence since 1891, first as an informal family gathering followed by a more formal organization founded in the Hanover, NH area.   Association records cite the first election of officers in 1925, and the formation of the TFA. The Association has met annually ever since!

We gather once a year to catch up on family news, to hold our business meeting, to have an enjoyable weekend full of activities, and to welcome new “cousins” who have joined the Association. The reunions are held at various locations throughout the US. Besides the annual reunion, many members of the Association work very hard all year long on other TFA projects, to insure that the Association will leave a proud legacy for all future Tenney generations. We publish a newsletter, entitled Tenney Times, four  times a year,  full of interesting articles about Tenney places, people and news. We maintain a Facebook page, and a message board on Rootsweb. The Association has in its archives old photographs, letters, heirloom items, books, newspaper articles along with hundreds of genealogical charts and manuscripts dating back over 80 years, written by and about Tenneys.

The Tenney Family Association is committed to sustaining the Tenney family name and heritage.

One of the benefits of Membership in the Tenney Family Association (TFA) is a member discount on TFA merchandise, available from our website. This is just a “sample:”

Descendants of Thomas Tenney
A set of four volumes that update the M.J. Tenney 1904 book, tracing the descendants of Thomas Tenney, from 1638 to 2004. These volumes bring three traced lined of Thomas and Ann (Mighill) up to 2004. The volumes include an additional 15 – 19 generations and traces the three previously unknown lines. These updated genealogies are the leading resource publication that details our family heritage.   All 4 volumes are available today!

Need a gift?   Check out our Merchandise page for unique items available thru the Association and Café Press. Want to recognize a birthday, anniversary, special event, or your business?

Searching for your family roots? Have Questions? Ready to share your Tenney lines? Looking for research help? Want to chat with the genealogist? Or submit lineage, histories, etc. to our genealogist?

If you would like to share your family history, family stories and special occasions, a perfect venue is the Tenney Times. Submit your article(s) to Editor@tenneyfamily.org for publication in the quarterly newsletter.

Include discounts on Tenney merchandise and books; an email subscription to the quarterly newsletter, the Tenney Times; access to the Association’s archives and genealogy information as available; and one vote in the election of officers, and other issues, either in person at the annual meeting or by absentee ballot. 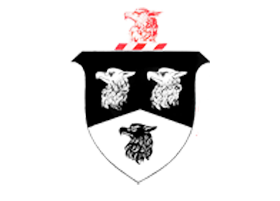 In the 1891 edition of Our Tenney Family, by MJ Tenney, she states : For the Tenney “Coats of Arms” we are indebted to Lieut. E. A. Tenney of La Crosse, Wis., who has carefully investigated the matter (at his own expense), and submitted the result of his research, with the electrotype, to Prof. Tenney and men learned in heraldry, receiving their approval, which services we gratefully accept.

This article is not about how it was determined that this is our Tenney Coats of Arms, but rather the history of this Chair that displays the Coats of Arms that we have adopted as ours. One can refer to the 2007 Edition, Volume One, for more details of the Development of the Science and Art of Heraldry, as presented in “The Royal Ancestry of Deacon Levi Tenney”.

This chair was given to me by Janet (Jay) Tenney of then, Arlington, Massachusetts. Jay was a long time member and Officer of the Tenney Family Association. Because of the proximity of us living near each other, having met at a Tenney Reunion approximately 1995, and as co Officers of the TFA, we became good friends. In 1998, Jay decided to sell her family homestead, and move to Peabody Mass, to a Senior Living Community called Brooksby Village.  As many know or realize, leaving one’s home, means downsizing one’s personal possessions. As much as Jay was proud of having this chair, which befitted her colonial style home (built in 1804), it would not fit in her new apartment at Brooksby Village. I was the Curator for the TFA at the time, so Jay suggested that I take the chair, knowing how passionate I was in regards all things Tenney related. 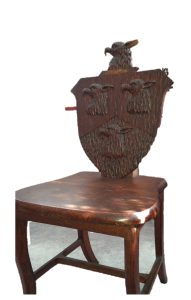 I promised to take very good care of this precious Family heirloom, with one stipulation. Which was, I would house it “until the TFA had an appropriate location where it could be displayed with honor”.  Jay liked the idea. (My hopes and dreams at the time was that the TFA would some day have a museum of sorts, where we all could proudly display all the wonderful items that the TFA Archives holds).

Jay’s knowledge of the exact history of the chair was limited. She knew it had been made in Thomaston Maine, and commissioned by her Grandfather Henry Warner Tenney.  I grew up in Maine not too far from Thomaston, and knew that Thomaston facilitated a prison there, that for many years was famous for its hand crafted wood products. (As a child on our “Sunday drives to nowhere”, my parents often stopped at the prison’s retail store to look at the items that the prisoners had made).

Henry Warner Tenney was born Nov 1858 in Boston, he married Belle Lewis Topliff in 1880. By the dates of birth of his children, and gauging the approximate age of his son’s in the picture, it is estimated that this chair was made in 1891. He is the man with the thick mustache.  His wife Belle died in 1901 at 40 yrs old. This picture of Jay’s Grandfather and family can be found in the Tenney Times Issue #10.

The back of the chair is definitely all hand carved, and is made of one piece of wood. It measures 21″ high by 16″ wide and is 7/8″ think. The Griffins’ right ear, at some point prior to my receiving it, had broken off, but was reattached.  There also appears under the top Griffin, a slightly lighter shade of stain, and two small pin holes. My guess is it may have had some sort of metal name plate attached.

The seat of the chair is made from 2 pieces of wood, bonded together. The wood of the seat is quite grainy, though I can not identify what type it is. The legs definitely are made of oak, which is easy to recognize.

The chair being approximately 122 years old, is in incredibly good shape and very solid. It’s obvious that it was never used as a chair, but a treasured family heirloom.  Hopefully some day, we will be able to proudly display it in our TFA museum, as Jay and her family did for 3 generations.

You are invited to join the

Visit us on line at: www.tenneyfamily.org