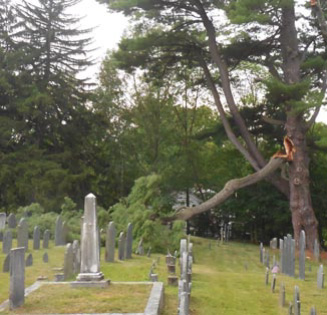 OBBG Round Up: By Barron

Summer finally arrived in New England, and now it is hot and sticky. Never thought we were going to ever see warm weather again up here in New England, where it all started.

Our Angels, Cousin John Hardy and Melinde Lutz have been on the ball regarding NHR of OBBG. On June 15, the Bradford Burying Ground was accepted by the National Park Service, Department of the Interior, for listing in the National Register of Historic Places. A copy of the official letter and certificate was sent to me on July 13, 2015 and received July 17, 2015. Many thanks are sent to John and Melinde their efforts for the OBBG. A job well done my friends. Time to celebrate your efforts now. John Hardy has suggested erecting a stone on the site. The proposed stone with a National Historic Register plaque can be placed near the current bronze plaque in the front of the cemetery. Perhaps we can get the Mayor to do a little ceremony and maybe get the City to apply more funds/assistance in maintaining the grounds. Great suggestion John!

The good news: the hanging limb previously reported in the TT spring edition, has been removed by the City Tree Warden. Yippee! More good news is that our Angel, Erik Peterson and the City have worked out a deal, so Erik and his boys are on the job. I took a drive over this morning and it looks great. The bad news is that another tree has fallen, apparently in the last few days, and this one has taken out two headstones. I didn’t get a chance to take a picture, but it is pretty nasty. Erik is being pro-active as he has already called the City and the Tree Warden. Erik has indicated that he will try to repair the stones.

Remember the mailing effort to the City Council we executed? It was so successful. The POWER of TFA? In talking with Erik today, we thought it might be a good idea to email the City Mayor and the City Council about how pleased we, the TFA, and related OBBG families are, about the City’s efforts in maintaining our OBBG gem.
This will again be the power of the TFA keeping OBBG first and foremost in the City’s mind.

It is nice to see the City of Haverhill stepping up to care for their property, which is one of our nation’s GEMS. And, thank you so much Erik and Leslie for all you have done for OBBG and the TFA. Love you much.

Hi Everyone,
Here is a photo of the tree branch that fell. It did break two stones and possibly more (we will know when the branch is removed.) The BBG looks great, Eric has been doing a great job. However we still have problems.

There are a few dead trees that have to be removed before they fall. The forgotten corner is completely regrown back in. The section of the BBG near the swim club is over grown.

Because this is where the low spot is in the wall is, people have been using a different spot and now that part of the wall is falling apart. Many stones have already fallen out.

I have also seen that the wall is being invaded by weeds. I have been spraying the wall for the last few years with weed killer but have missed the last year (sorry) but that is all it takes. One missed year and they are really bad the next year. I pulled some of the weeds already but I will have to go and spray the wall before it gets worse. However, these weeds have already loosened the stones. I feel that the wall surrounding the BBG will have to be patched very soon (while it is still the top layer) or it will get much worse.

I try to do as much as I can so that Eric does not have to do it all but it is a never ending battle. I am

happy to see that the grass is growing much better in the back. I have been seeding that back area for a few years now and with Eric mowing regularly it looks great and the weeds are a bit less of a problem. We still need a group effort to cut back the brush that is always trying to reclaim the cleaned up area but if we can keep pushing it back and Eric can keep mowing we should have less and less of a problem each year. I have taken photos of each of these items (listed above) and if anyone wants me to send them in an email just let me know.