Over the holidays, I had a chance to read through the impressive work presented by John Hardy and Melinde Lutz to achieve the National Register of Historic Places (NHR) recognition for Old Bradford Burial Grounds (OBBG). Their presentation is an incredible and successful effort. The Friends of OBBG (FOBBG) have begun arrangements for a plaque acknowledging John & Melinde’s achievement. As I read this History, I realized that, while some of us know why we help support OBBG, there may be many more of us that are not aware of its importance. The complete history is 13 pages in length. The Site Map referenced can be found at John Hardy’s website www.bradfordburialground.com. Below is the first of the “series”. Additional sections will appear in upcoming issues of the Tenney Times. It is my sincere hope that you will enjoy reading about the OBBG and its historical significance, that you will learn more about the TFA’s interest in OBBG, that you will be inspired by John & Melinde’s achievement, that you will understand the significance of NHR, that you try making a trip to OBBG to walk it’s grounds, that you join the FOBBG volunteers cleaning up the grounds or, if a visit is not feasible, that you will open your checkbook and give generously to our continued support of this wonderful cemetery. Enjoy!! – your Interim Editor.

The Bradford Burial Ground is eligible for listing on the National Register of Historic Places under Criteria A and C with Criteria Consideration D at the local level as a well-preserved, town-owned 17th, 18th and 19th century Colonial era and later burial ground containing a variety of slate, schist, limestone and marble markers. The Bradford Cemetery contains a range of gravestones that exemplify the changing views of death in American society in both iconography and materials.

The cemetery was established in 1665 by the first settlers of Bradford (1672), which became part of Haverhill in 1897, making the Bradford Burial Ground one of Haverhill’s oldest and most historically significant cemeteries. The 1.5 acre cemetery contains over 700 graves with the earliest extant readable gravestone dating to 1689 as well as unmarked graves which may be even earlier.

Significant burials include many of the town’s original settlers, war veterans, church leaders, and several individuals of note. The period of significance extends from 1665 when the cemetery was established to 1935, when the stone wall was rebuilt by the WPA.

The first settlement of what became Bradford occurred in 1649 when a group of sixty families was organized under the leadership of Rev. Ezekiel Rogers. They had come from Yorkshire, England twelve years before, landing in Salem and settling in Rowley.

The settlement, known as Roger’s Plantation, covered the area which was to become Rowley, Georgetown, Groveland, Boxford, and Bradford.

After Rev. Rogers died on January 23, 1660, Rev. Zechariah Symmes of Charlestown became their pastor. Originally services were held in private homes or barns. John Haseltine, who was one of Rogers’ original families and built a house on Indian Hill near the Merrimack River, donated an acre of land on which to build a meetinghouse and for a burying-place provided the town build a good, sufficient five rail fence and maintain the land. On January 5, 1665 the vote of the town was passed.

The Bradford Burial Ground remained the only cemetery in the town until 1723 when the East Parish (now Groveland) Cemetery was established.

An additional half acre was added to the Bradford Cemetery at an unknown date in the 18th or 19th century; the cemetery has been 1.5 acres since at least the late 19th century.

The settlement continued to grow in the years that followed. In 1672 the name was changed to Bradford. The first meetinghouse was of log construction and was erected near the west corner of the burying ground. The earliest readable date on a headstone in the Bradford Burial Ground currently is 1689 but it is likely that there were once earlier stones that did not survive.

From the Papers of the National Register of Historic Places

Hope you enjoyed reading the impressive work presented by John and Melinde to achieve the National Register of Historic Places (NHR) recognition for Old Bradford Burial Grounds (OBBG) in Part 1 of the History of OBBG included in the last Tenney Times. As mentioned in Part 1, our intent is to inform members of the importance and historical significance of OBBG. The complete history is 13 pages in length. The Site Map referenced can be found at John’s website www.bradfordburialground.com. Additional sections will appear in upcoming issues of the Tenney Times.

The Friends of OBBG (FOBBG), in celebration of OBBG receiving National Historic Place Recognition, have scheduled a NHR Plaque placement ceremony on Saturday, May 7th, 2016 at 2:00 PM with celebratory guest speeches and refreshments. Please plan to join us! RSVP to barrontenney1948@comcast.net by April 20th, 2016. See you there!

Below is Part 2 of the “series”. It is our sincere hope that you enjoy reading more about the OBBG and its historical significance, that you learn more about the TFA’s interest in OBBG, that you are be inspired by John & Melinde’s achievement, that you understand the significance of NHR, that you try making a trip to OBBG to walk it’s grounds, that you join the FOBBG volunteers cleaning up the grounds or, if a visit is not feasible, that you will open your checkbook and give generously to our continued support of this wonderful cemetery. Enjoy!! – your Interim Editor

The Bradford Burial Ground (locally, known as (BBG) at 324 Salem St, in Bradford, MA, was founded in 1665 after John Haseltine, one of the first 3 settlers of Bradford, donated 1-1 ½ acres of land to the town for use to set a meeting-house and as a burying place.

The age of the cemetery is well documented in Kingsbury’s magnificent book, “MEMORIAL HISTORY OF BRADFORD, MASS.”, published in 1883 in HAVERHILL, MASS by C.C. MORSE & SON, BOOK AND JOB PRINTERS, 1883.

The Kingsbury book can be located online at: https://archive.org/details/memorialhistoryoOOking

From the Kingsbury book:

“Whereas, John Haseltine, senior, of Haverhill, having given to ye inhabitants of ye town of Bradford one acre of land to set their meeting-house on, and for a burying-place, and did engage them to fence it and …”

The first 2 meeting-houses (also used as the worship house for the Puritan/Congregational First Church of Christ Bradford) were located in the cemetery itself. Pg 16-17.

“The meeting-house was the place of worship first of all, but it was the place for all town business; the rallying point for every loyal concern; the center of all civic affairs. The magistrates often held court there. The whipping post and the pillory were set up in its yard and well to the front.*

The pound for cattle occupied a corner, the school-house by its side, and behind all on the green slope facing the east they laid their friends to rest when, weary with life, they fell asleep.”

The first schoolhouse in Bradford was located in the cemetery. Pg. 16.

“The first school-house was built on the meeting-house lot, and was 22 feet long, 18 feet wide and 7 feet posts.”

Four of the first five ministers of the First Church of Christ Bradford are buried in the OBBG cemetery.

There are many famous people buried in this cemetery.This is the burial site of all of the early inhabitants of Bradford including four of the first five ministers and at least 15 war veterans from King Philip’s War (1675) to the Civil War. Also interred here are members of original settler families, church leaders and other individuals of note.  This is also the final resting place for at least nineteen war veterans from both domestic and foreign wars beginning with King Philip’s War (1675).

Another Revolutionary War veteran, Nathaniel Thurston (d.1811, site #174) is buried here with his six wives whose dates of death range from 1790 to 1808. The graves are marked by a row of slate stones. (A seventh wife, Frances, whom he married in 1810 outlived Thurston and died in Alabama in 1824). Thurston was a farmer and an exporter of beef. He was also founding president of the Bradford Academy’s board of trustees. Bradford College was founded in 1803 by the religious parish and was one of New England’s earliest coeducational institutions. Nathaniel Thurston also served as a member of the House of Representatives in 1795, 1797, 1799 and 1805 and in the Massachusetts State Senate in 1806, 1807, 1808 and 1809. Also buried here is Daniel Thurston (d.1805, site #365) who was an officer during the American Revolution, a Member of the Committee of Safety, and a member of the committee drafting the Massachusetts State Constitution. There are also those who fought in the War of 1812 and the Mexican-American War (1845).

There is a marker commemorating the life of World War II veteran, Raymond Winslow Stevens (d.1975, site #2) although Stevens was not actually buried here.

Bradford area was first settled around 1649 by Rowley, MA. The BBG was established in 1665. The Bradford Burying Ground is the oldest known burial place associated with the former town of Bradford (later becoming Groveland and part of Haverhill).

Located about a quarter of a mile from the Merrimack River, the site originally also contained Bradford’s first and second meeting houses although there are no remains of these buildings today.

The polygonal-shaped parcel measures 1.5 acres and contains in excess of 700 marked graves including many distinctive gravestones reflecting the work of local stone cutters. The designs on the earliest headstones (late 17th and early 18th centuries) are derived from the strong and stern religious beliefs of the Puritans while later headstones include more decorative stones incorporating winged faces, urns, drapery and other Victorian motifs. This is the burial site of all of the early inhabitants of Bradford including four of the first five ministers and at least 15 war veterans from King Philip’s War (1675) to the Civil War. Also interred here are members of original settler families, church leaders and other individuals of note.

In addition to the grave markers, the cemetery also contains a flagpole, several monuments and a stone retaining wall rebuilt by WPA workers. 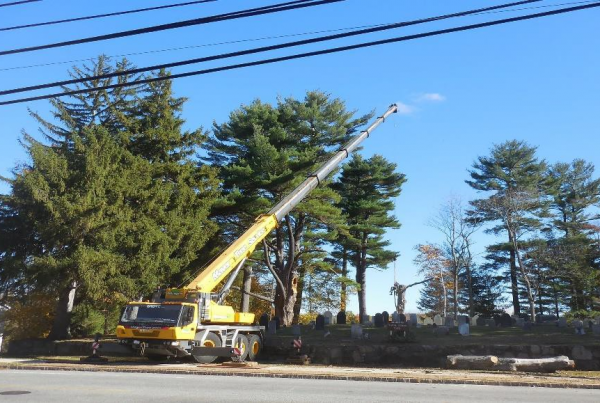 G4Developer | OBBG | No Comments
REPORT FROM THE FRONT There has been and continues to be a lot going on at OBBG in the 2016 winter. Fall cleanup– The Local chapter of the Daughters of... 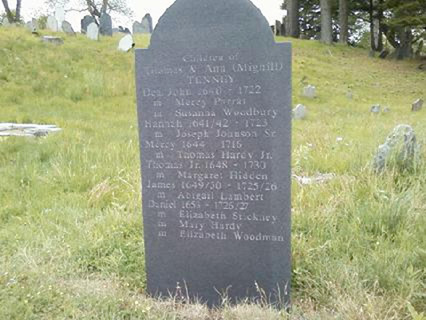 G4Developer | OBBG | No Comments
Thomas Tenney Monument 2013 Rededication to Add Family TENNEY TIMES – Fall 2013 Weather or not – Tenney’s take on MASS-ive Adventures Many of us arrived in Boston on one... 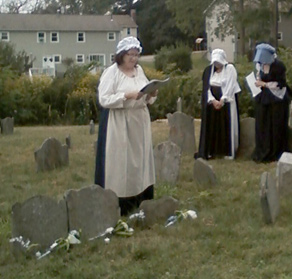 Every Stone Has A Story 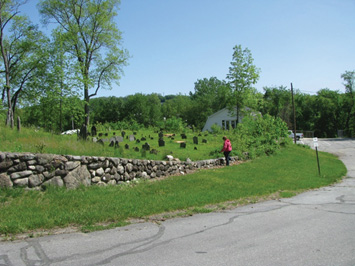 G4Developer | OBBG | No Comments
OBBG Update – TENNEY TIMES, Fall 2013 Maintenance – Our ANGELS, Peterson Landscaping, continue to keep the grounds looking good. They did a clean-up In May and June whereby brush was... 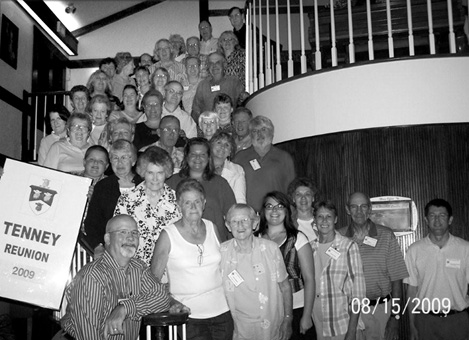 President’s Message – Tenney Times, Fall 2009 REUNION NOTES “We were blessed with cooler than expected temperatures and beautiful weather for our reunion in Haverhill, Massachusetts in August.  I am… 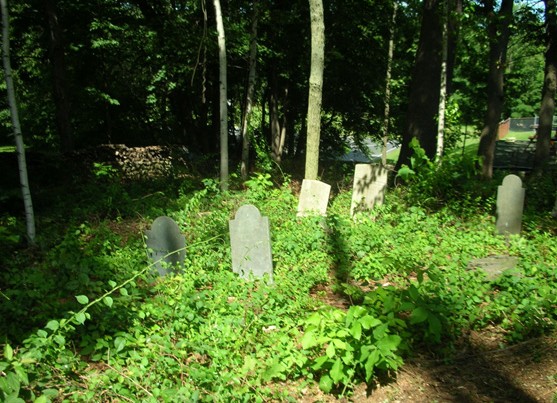 Bringing a cemetery back to life

A story by Debby I’ve been an avid genealogist for several years now, my journey having begun in 1992 at the age of 40. It was only natural that my…